A history of internationalisation and business expansion.

Rafael Cerdá, Commercial Director and Owner of Artesanía Cerdá SL joined the family business in 2003 in the Quality Department, after having studied Industrial Engineering and after his brothers insisted that he take an active part in the company founded by his father in 1972.

Artesanía Cerdá had been a Disney Partner for 16 years at the time. As a licensee, Cerdá designed and manufactured gift and stationery products in l'Olleria, a town in the province of Valencia.

At the turn of the century, the company decided to attend what would be the first of many trade fairs. In 2000 Artesanía Cerdá attended the annual international trade fair for stationery and office supplies, DIPA, which took place very close to home, at Feria Valencia. Since then and until the cancellation of the fair in 2007, every February Cerdá attended the most important event of the sector with the latest novelties of children's characters owned by Disney.

Considered to be the major benchmark for the gift sector in Spain and Portugal, attending Intergift was not easy for Cerdá. He spent more than six years on the waiting list to be able to take part in this international fair, in which brands from more than 30 countries participate every year in its January and September editions.

In 2008 a great opportunity presented itself. Artesanía Cerdá was part of Intergift for more than ten years. It was in 2017 the last year that the sales team attended this fair, which to date has been held for 79 editions.

2017 was a year to remember as it marked a before and after for Cerdá which, in the midst of the crisis in the licensing sector, decided to launch its global international expansion, putting the focus on a project it started in 2007.

In the midst of the financial crisis following the collapse of the real estate bubble, Artesanía Cerdá attended the International PaperWorld fair in Frankfurt for the first time in 2008. After attending in 2004 as visitors and verifying that Cerdá's licensed products would indeed be well received by the sector, the sales team began to visit Germany on an annual basis.

And not just to attend PaperWorld, but after years on the waiting list, Artesanía Cerdá finally managed to exhibit at the world's leading toy fair, Spielwarenmesse, in 2009. "We started with a stand of just 24m2, which over the years became a 300m2 stand," recalls Rafael Cerdá.

The Cerdá brothers started to go to Germany every year to attend both fairs, which were held at the end of January and the beginning of February respectively. "Little by little the days between one fair and the other became shorter. It got to the point where my brother and I would pick up the stand in Frankfurt and take the van to Nuremberg to set up because the next day the other fair would start".

Discover: Cerdá's For Fan Pets line is a hit in Interzoo

When the dates of the fairs overlapped, the team decided to continue going to Nuremberg, which had established itself as the leading fair in the toy and gift sector. A sector in which Cerdá, with its Life's Little Moments, had carved out a niche for itself.

With more than 60% of its sales coming from exports, Artesanía Cerdá is currently consolidated as a trusted partner of many companies in different European countries, working with well-known brands such as: Disney, Marvel, Star Wars, Warner Bros, Paw Patrol or Peppa Pig, among others.

Frankfurt, Nuremberg, Bologna, Milan, Sofia, London and even Hong Kong! Cerdá regularly attended appointments with its clients in the different cities until 2020. With COVID 19 and the resulting worldwide lock down, Cerdá changed the way it connects with its customers from the analogue to the digital world. 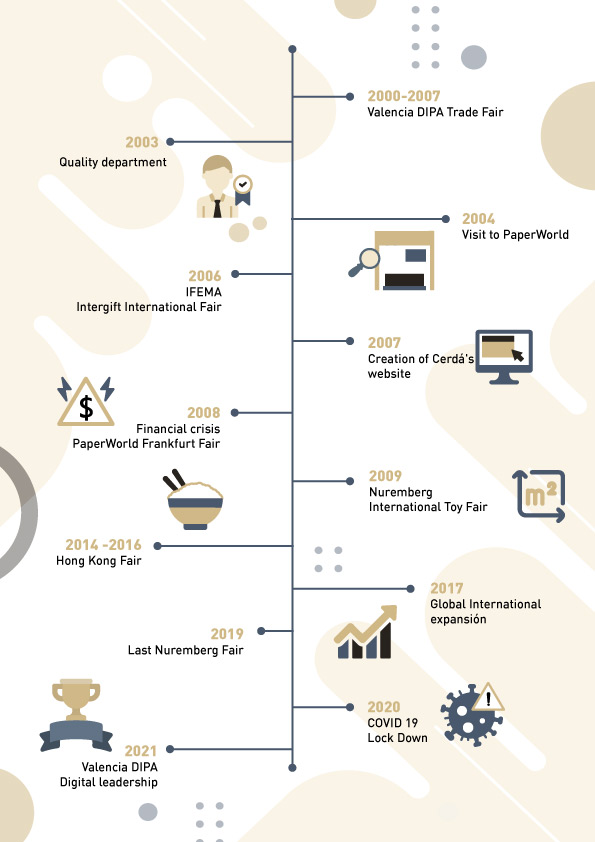 And unlike many companies, Cerdá did not do this by forced marches, but almost organically. In 2007 Artesanía Cerdá created its first draft of a website that was updated, renewed and developed over the years until it became an essential tool for its customers today.

At the same time, in 2012 it began to work on all the digitalisation that would lead it years later to achieve digital leadership in the licensing sector, transforming each of its services with a clear focus on this technological aspect. "So when people were locked up at home in 2020 and digital became the only channel of contact with clients, at Cerdá we were able to continue with our activity through teleworking, our digitalised services and our website".

Since 2017 Artesanía Cerdá has been committed to a digital marketing strategy to attract customers. Through inbound marketing aimed at B2B companies, they have started to contact customers first at a national level and in a second phase with an international strategic approach.

"Through a well-managed and well-worked methodology, at Cerdá we have gone from the traditional method of prospecting, with international agents, to implementing SEO techniques" Through the content generated on the blog and improving the user experience "we have achieved a much higher return on investment than initially expected, making us digital leaders in our sector".

As part of the international strategy for the coming years, Artesanía Cerdá focuses "on continuous digital evolution, the development of various projects linked to sustainability and eco-design, presence at international trade fairs and, as in the past, taking care of the people who are part of Cerdá, to continue creating Life's Little Moments together with our customers, suppliers and team".

You can't sell what you can't see. Make the most of the space in your shop