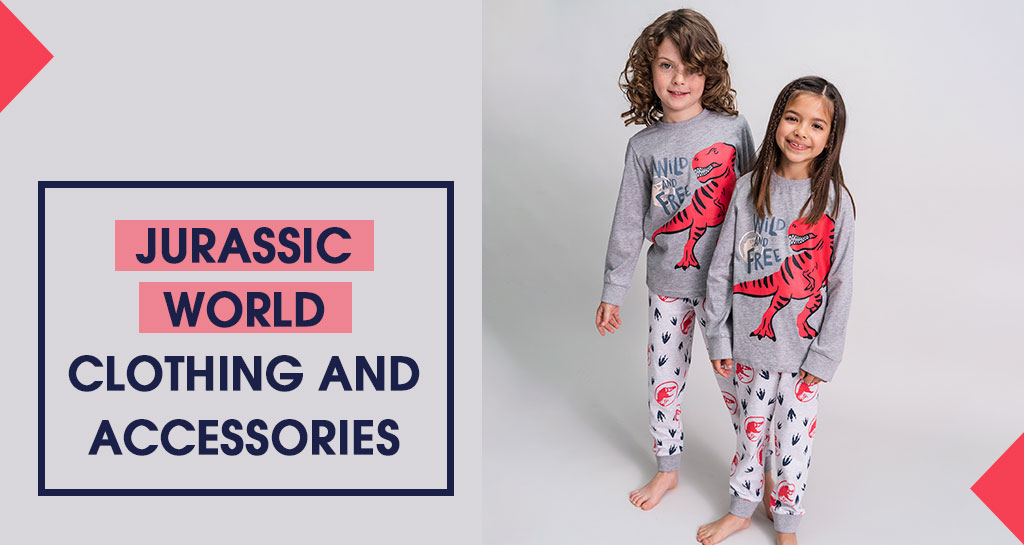 Dinosaurs never go out of fashion. So different from everything we know, so powerful, so unique! and so real. Young and old alike are fascinated and passionate about them and they help us to let our imagination run wild and to dream awake.

That is why, from Cerdá, as a wholesale clothing supplier, we want to take the opportunity of the premiere of the new Jurassic World movie so you can benefit your business, reach more people, increase your sales and get to attract and retain your customers.

And all this thanks to all the original licensed clothing and accessories we offer. You can't miss it!

The beginnings: Jurassic Park in 1993

For the younger ones, it is possible that the premiere we experienced in 1993 with the film 'Jurassic Park' is nothing more than a story they have heard at home from their parents. But the truth is that with this film, cinema changed and we, the audience, changed with it.

For the first time, something spectacular appeared on screen that left everyone fascinated. The special effects were incredible for the time and the theme, unsurprisingly, was eagerly awaited by the public, who welcomed it with open arms, making it a resounding commercial success, grossing 900 million dollars.

The franchise's wholesale clothing was in high demand, as were all products related to the franchise. And fans of the film eagerly awaited the sequel, while passing on their fascination with the world of dinosaurs to their children.

Jurassic Park, as we have said, was released in 1993. It tells the story of a unique theme park on an island in Costa Rica, inhabited by dinosaurs that have been scientifically cloned.

The park needs experts and investors to facilitate its opening to the public, and it is during their visit that a few dinosaurs escape and an incredible plot begins that keeps the viewer on tenterhooks.

After the resounding success of the first film, the second part, 'The Lost World', was released in 1997.

This film is the sequel to "Jurassic Park'' and is set in a time span of 4 years. The dinosaurs have been moved to another island where they live in complete freedom. But the nephew of the park's founder has taken over the business and has every intention of exploiting it, so a series of expeditions to the island begin in which they visit dangerous places and also have to face continuous attacks from the dinosaurs themselves.

Although it was not as successful as the first one, it was also highly appreciated by the public. So it didn't take long for them to consider the possibility of a third part.

And that is what happened in 2001 with Jurassic Park III and later with Jurassic World in 2015, which became the highest grossing film in the history of cinema. Only three years later 'Jurassic World: Fallen Kingdom' was released in 2018.

But, after all these successes, they have decided that it is time to put an end to the film saga and give it the ending it deserves. And so, on the 9th of June, the last and, according to the reviews, magnificent 'Jurassic World: Dominion' will be released.

Jurassic World clothing has become very popular among fans. Everyone wants to be able to wear it, find the best qualities and novelties on the market and enjoy it. And even more knowing that the end is near and that, without a doubt, it promises to be a true work of art more powerful than 'Jurassic Park' itself.

Jurassic World clothing: get the most out of your business

The release of 'Jurassic World: Dominion' is an unrivalled opportunity to boost sales and profits for your business. All clothing and accessories, such as Jurassic World backpacks, are going to be the most popular products of the year.

The secret is in the mix of winning elements: dinosaurs, a successful franchise, the release of a new film and, to top it all, the end of the saga!

So now is the ideal time for you to get down to work, consult our catalogue which includes Jurassic World products, select the ones that best suit your customers' needs and include them in your stock. Success is guaranteed!

In the Cerdá catalogue you can find everything your business needs. Wholesale clothes of the most popular licenses, with the best quality and completely original and creative.

Your customers will come to your shop for the most fun and exciting new products on the market, so make sure you get at least the must-have items.

Here is a short list for you to consider and don't forget to add any of them to your stock!

Jurassic World backpacks are a must-have in your shop. They are comfortable, practical, fun and original. School backpacks, trekking backpacks or extendable backpacks so that wherever your customers go, they can go with their favourite characters!

Another must-have on your shelves are the Jurassic World pyjamas. Nights are funnier and warmer if dinosaurs are watching over our dreams.

Of course, include various franchise accessories in your store. And with them, you can encourage cross-selling, captivate your audience and offer quality products.

You can incorporate slippers, cases, pencil cases, fanny packs... check out our catalogue and enjoy making your customers happy!

The new release of the saga is a long awaited event for the fans and it is about to become a reality. So they are eager, anxious and expectant to be able to purchase all the Jurassic World accessories and clothing that best represent their favourite films.

Don't miss the opportunity and prepare your business to succeed and increase your profits. Dinosaurs continue to be fascinating characters that captivate viewers and make them want to buy all the merchandising available to them.

From Cerdá, as a clothing and accessories wholesaler, we make it very easy for you: register on our website and get ready to succeed!

Do you know what is a healthy company?