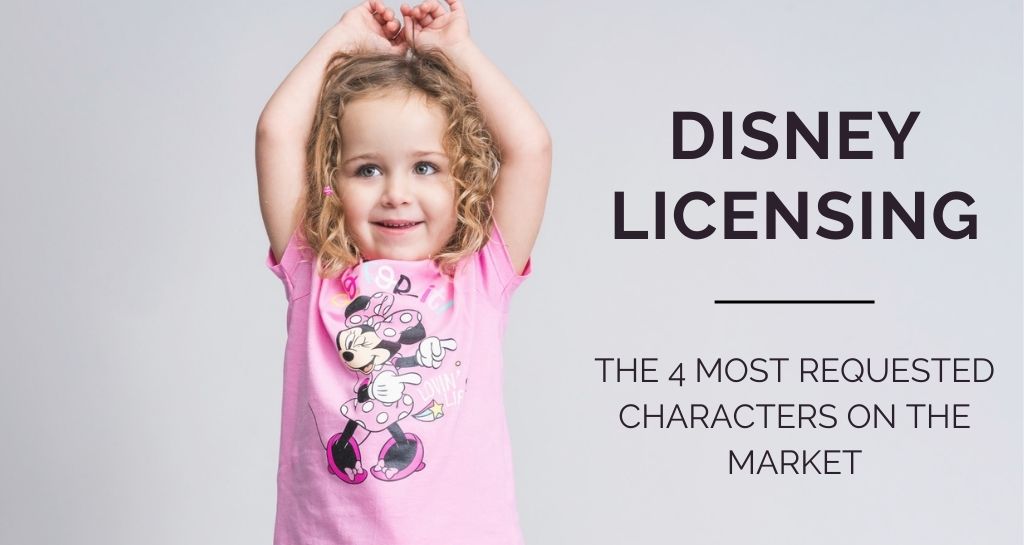 One of the collaborations Cerdá, as a wholesaler of clothing and accessories, is most proud of is the one with Disney: the beginning of the partnership dates back to more than 30 years ago and has never failed to produce solutions that are loved by children and adults alike.

When it comes to children's characters, Disney is the production company that jumps to everyone's mind, regardless of age and country of origin. Disney characters are known around the world, are intergenerational and beloved, and are a real asset for sellers in all categories, from retail to e-commerce.

Let's find out together what are the advantages of Disney licensing and which are the most requested characters of the moment.

The benefits of Disney licensing

Selling Disney character products in your store means targeting a very broad audience. Disney characters are loved by children, but they are no strangers to their parents like - on the contrary – it happens with some novelties. Peppa Pig, for example, is a loved character by children, but adults don't understand her charm. Minnie and Mickey Mouse, on the other hand, unite young and old.

The Disney characters, then, are known all over the world. This is a very important advantage, especially for those who manage even or only online stores. With Disney licensing , your target audience goes global (as long as a place is reachable by your expeditions!)

Disney licensing doesn't need marketing. Or rather, marketing remains fundamental, but you don't need to do it yourself. Disney characters are in fact very well known: there is no need to advertise Minnie and Mickey or Frozen characters… Everyone already knows who they are!

Finally, Disney licensing never goes out of style. This translates into a practical benefit for store or e-commerce managers or owners. For all those categories of seasonal products - such as, for example, clothing - the products of the old season can be repurposed for the new: the public will not have forgotten who that little mouse with white gloves drawn on the shirt is!

Keep reading: Looking for a Disney distributor? Cerdá is here!

The 4 most requested characters

We risk being repetitive in our content and market analysis, but failing to mention Minnie and Mickey Mouse when it comes to Disney licensing would be a mistake.

These two characters are so long-lived and popular that they have almost become the very symbol of Disney, but also of childhood and innocence.

With the products of Minnie and Mickey Mouse you can take advantage of all the advantages of Disney licensing that we have mentioned above!

Frozen and the other Disney classics

Although a new Disney cartoon (Turning Red) is out, the attention of the majority of the public is for the moment still directed to the classics. Frozen in this case is as much a guarantee as Minnie and Mickey are.

Among other Disney classics we can certainly name the Disney Princesses, who are always very recognizable by an audience of young and old.

It has been a few years now that Disney has incorporated the Marvel brand. All the superheroes of Marvel, and in particular those of the Avengers who enjoy particular popularity today, have therefore become Disney characters .

The Avengers movies keep coming out to cinemas and it is always important to keep an eye on the news to understand which characters will be in vogue. In 2022, the most important release was the Spiderman movie. A Doctor Strange movie will also be released soon, but if your audience is made up mainly of children and parents, it will be Spider-Man who will capture all the attention for himself because he is historically better known and loved.

Even Star Wars is now part of the Disney universe. No Star Wars movies have been released in theaters for a while, but the Disney Plus streaming platform, on the other hand, continues to churn out content. In particular, the character who has already become a new symbol of the saga is Grogu, The Child.

Cerdá is your Disney licensing distributor

As we have mentioned, the collaboration between Cerdá and Disney has been going on for more than thirty years. The collaboration with Disney allows Cerdá to create products with original license. The original license is the permission that Disney has given and continues to renew to Cerdá to be able to use the original designs of all Disney-owned characters and logos (which now also include Marvel and Star Wars!). The original license, for Cerdá, is also a guarantee of quality as regards the choice of materials and the workmanship of all the objects that are made with the Cerdá and Disney brands. For this Cerdá is the most competent Disney distributor to rely on!

Disney licensing is an opportunity that allows you huge profits at a very low risk. There are no more well-known and loved characters than Disney characters and this guarantees you a fair amount of confidence in the success of your campaigns and sales. The original license that Cerdá makes available to you helps you to stand out from all the competition and become a point of reference for your customers.

Adult fashion trends 2022: all the characters!

Mickey mouse wholesale: products and accessories to increase your profits

Minnie Mouse accessories for all ages, discover them!