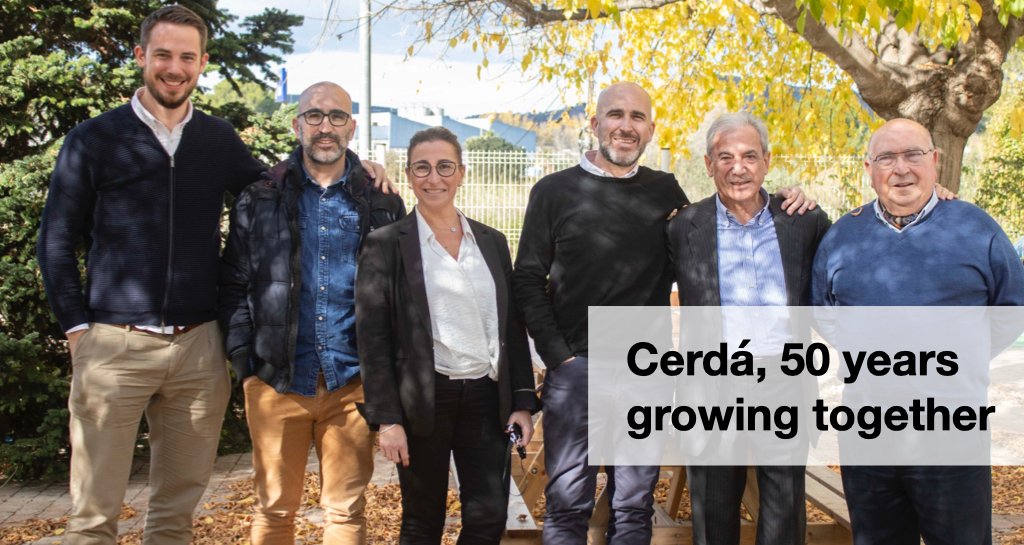 Licensing can be a relatively new concept in the business world. I am José Francisco Cerdá, the second of three siblings, and this Anglo-Saxon term, in one way or another, has accompanied me from my youth until now.

I was born in the 70s and grew up in l’Olleria, a town in the interior of the province of Valencia. I have lived the passion for work that my father has instilled in my siblings and me since we were little. Although at that time I did not imagine that the seed that my father sowed in us would one day sprout.

It may interest you: Cerdá, since 1972 making history

My level of awareness about what it meant to work was zero. I also didn’t know what my father did for a living. I remember that one time in class, the teacher asked us about our parents’ occupations, and I didn’t know what to answer. My father was different from the other children’s parents. He wasn’t a bricklayer nor a baker, he didn’t have a store and he didn’t work in a glass factory either.

He traveled from one place to another. He spoke daily with gentlemen whom he called clients or representatives and he spent the weekends in the manufacturing workshop that he had. There he made what I called “crafts”, which were nothing more that models of the new product collections. I think that the artisan vein of the company was conceived there.

It was hilarious to have a father who worked at something we couldn’t name because we didn’t really know what he was doing for a living. We spent hours in the workshop, which was also a factory and a warehouse. My siblings and I turned that 400m2 into our playground. We ran around the corridors, we hid between the shelves, we drew on the walls… We basically did what children do but in a less common environment.

The summers of my childhood were different too. Our school vacations coincided with the strongest peak of the company’s activity. So we put our shoulders to the wheel to “get the job done”. This phrase was like a mantra that was repeated in my house. My siblings and I contributed our grain of sand, although I must admit that many times we were more of a hindrance rather than a help.

The best was when my father took us on trips to visit clients, and we could go with him the whole week. I was about 10 years old when we began to know what the sales profession was. And we did it based on car kilometers in the middle of summer. Without air conditioning, experiencing firsthand the adventures that a salesman goes though in his day to day. For me it was like a rollercoaster. These are without any doubt one of my best memories.

The affection with which the clients treated my father also comes to mind. There were two things that were non-negotiable for him: his values and the way he understood the sale. “The client has to be respected” he told us, and possibly because of that he mishandled that they tried to deceive him or that they did not pay him.

My father still remains in contact with many of those clients he met in the 80s. At home we have heard many stories about those times and mi father treasures them with nostalgia.

Over time I began to do internships within the company. Without knowing it, I was in different departments, and I had what today we would call a business coaching process. Personalized and from the manager's hand. I really enjoyed doing those internships, although now that I think about it, they weren't paid.

And that is how in 1987 my father took me to Madrid one day. It was my first trip there; I was 12 years old. We were going to Disney. Imagine my emotion. I thought I was going to a park with attractions, toys and lots of fun. Nothing further. On the way back my father explained me that we were going to do thing with Mickey Mouse. That day didn’t go as I expected. It was even better. We had signed the first licensing contract for Cerdá.

From that moment on, the company began to experience a visible change in the way it did business. The influence of Disney modified the profile of the organization, in the same way that adolescence marks and defines the path that you will follow as an adult. I could say that the company and I entered together in a kind of puberty in which changes were constant.

Living the transformation up close meant that my university education was framed within the business field; I was specially attracted to the more creative side. That is how I got started in marketing. I liked the idea of doing something that I didn’t really know what it was, because of what it implies: innovation, being continuously discovering concepts and facing new challenges to discover. It caught my attention and I flow with it. Nowadays, I still like it and keep on learning and training.

Over the years, Disney got bigger and we got older. Mi siblings and I are already aware of what it implies to work in the family business. Now, we also know what my father did for a living. But the innocence and the desire to play is still there. That desire to play has led us to embark on different adventures: expanding facilities, travelling the world, signing new licenses… Always under the watchful eye of its founder.

That gaze of a father who watches his baby, sees how he stumbles, gets up and wonders: what the hell he is going to do with the plug!

When I look back I see that nothing has changed and everything has changed. Although the essence is the same and we maintain the spirit, philosophy, values and treatment of that small craft workshop, now we do it with a great team and with a maximum level of demand that experience brings.

Together we continue to learn and share those little moments that have always accompanied us in these 50 years of life.

Novelties in Cerdá! Discover the best products for winter 2022

Pyjamas for the whole family: feeling like a team!

CERDÁ'S FOR FAN PETS LINE IS A HIT IN INTERZOO