Stock up on Warner Bros. clothing, its 100th anniversary is coming up! 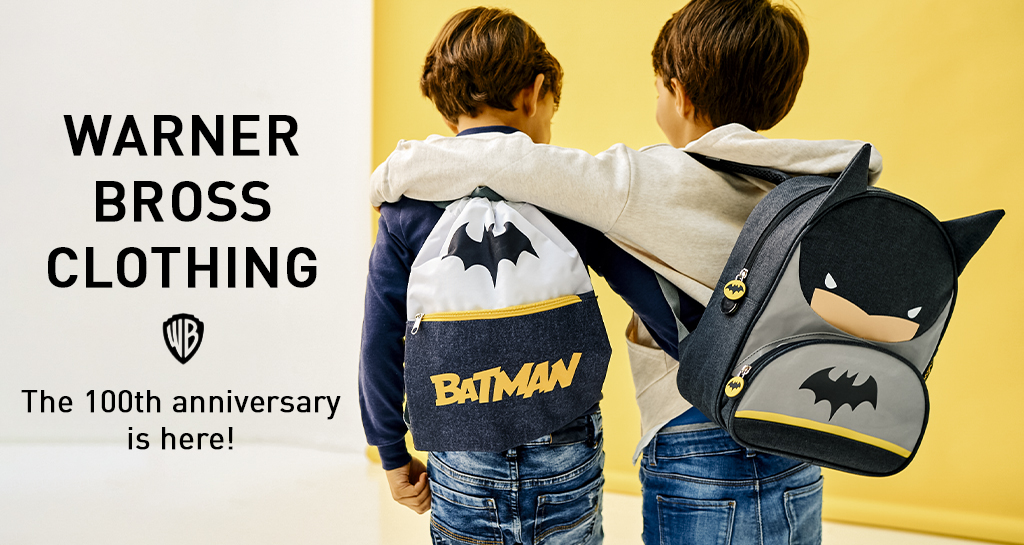 During all this time, and 100 years is a long time, the company has managed to carve out a privileged place for itself in cinemas and in the homes of society with its successful films and series. In which quality has been an unquestionable part, no doubt about it.

So, now that their anniversary is so close, they are organising great surprises so that all the fans of their many successful films can enjoy this special date to the full.

And why is it important for your business? Because it is the perfect moment to prepare your stock with all the Warner Bros products that, as wholesalers in licensed clothing and accessories, we offer you in Cerdá!

Take advantage of the opportunity and give your customers what they are looking for!

At Cerdá we work to offer the best, most innovative and creative products from the original licences we work with. We are a reference in Spain for the sector, and all this is due to our great involvement, the quality of all the products we manufacture and our tireless goal of helping our customers to attract customers, to retain the ones you already have and to help you increase your profits.

As distributors of wholesale products, we analyse the needs of the market, prepare our catalogues and deliver your orders efficiently and effectively.

And, of course, we help you with everything you need.

That's why, right now, we encourage you to stock your shop with Warner Bros. clothing, accessories and all the products you need to attract the attention of consumers and make it a success! Take advantage of the Warner Bros. centenary anniversary!

Throughout these 100 years, the company has created true works of art that have captivated and enchanted audiences.

Some of the best known and oldest are:

And many, many more spectacular films that will become part of the history of cinema thanks to Warner Bros.

But that's not all, because in addition to these mythical classics, they have also been the promoters of other incomparable films that continue to be part of our lives and that, thanks to their incredible stories, continue to be presented today and generate thousands and millions of fans.

The most important ones, which have also been a real box-office success, have original licenses and, therefore, we have them in Cerdá!

Discover some of them below and add Warner Bros. products to your shelves!

Superman appeared on the big screen in 1978 and, since then, it goes without saying that he has remained one of the most beloved Warner Bros. characters in history.

Children and adults alike have a little piece of television's most famous superhero in their hearts. His adventures, his bravery and his special way of being have given him the place in the cinema that he so richly deserves.

In our stock you can find many products with the image of Superman, for babies, boys, girls, teenagers, adults and even for pets!

Wonder Woman was released in 2017 and made a huge impact on viewers. At the height of the superhero boom and the fanaticism that this raised, one of the oldest and most adored heroines by the public jumped to the big screen by the hand of Warner Bros.

Warner Bros. gifts, products, clothing or accessories with the image of Wonder Woman are essential in your business to help your customers find everything they need.

The Looney Tunes are the best-known Warner Bros. cartoons and have been part of the lives of many generations since they first appeared on the small screen in 1930.

The Looney Tunes characters are endearing, lovable and loved by everyone. From Bugs Bunny to Tweety, Sylvester, Daffy Duck and Wile E. Coyote, among others. The clothes and accessories of these characters, which have been with several generations, are a guaranteed success in your business. They range from clothing for newborns to sweatshirts and clothing for adults.

Discover the Looney Tunes clothes for next winter

Batman is another of Warner Bros.' main characters and, with him, controversy is rife. There are those who don't have a soft spot for him, but those who do love him are not only adoring fans of the superhero, but also his most unconditional followers.

Backpacks, shoes, pet accessories, bags, hats and much more. Get all the Batman products that we offer at Cerdá and make your sales a success!

Are you looking for a retailer of original licensed products from this popular adult series?

You've found it! At Cerdá we have the best Warner Bros. Ricky and Morty clothing, with which you can get the adults who enjoy the parallel universe of these crazy characters into your pocket.

Do you want to see your sales increase, your customer base grow and your profits soar? Bet on the Warner Bros products that we offer you in our Cerdá catalogue and get closer to your customers.

The quality of all of them is guaranteed, so all you have to do is select the ones that best suit your audience and that's it!

The 100th anniversary of the studio is near, so it's the perfect time for you to prepare the stock in your store and fill your shelves with 100% licensed products. Don't let this great opportunity pass you by!

Trust Cerdá and its experience as a wholesaler of clothing and accessories, and bet on the future of your business.

Children's boots: get your business ready for winter

Looking for a wholesale beauty product distributor? Think of Cerdá!