Products and Novelties Point of Sale Tips and Advice

5 geek gift ideas to attract customers to your store 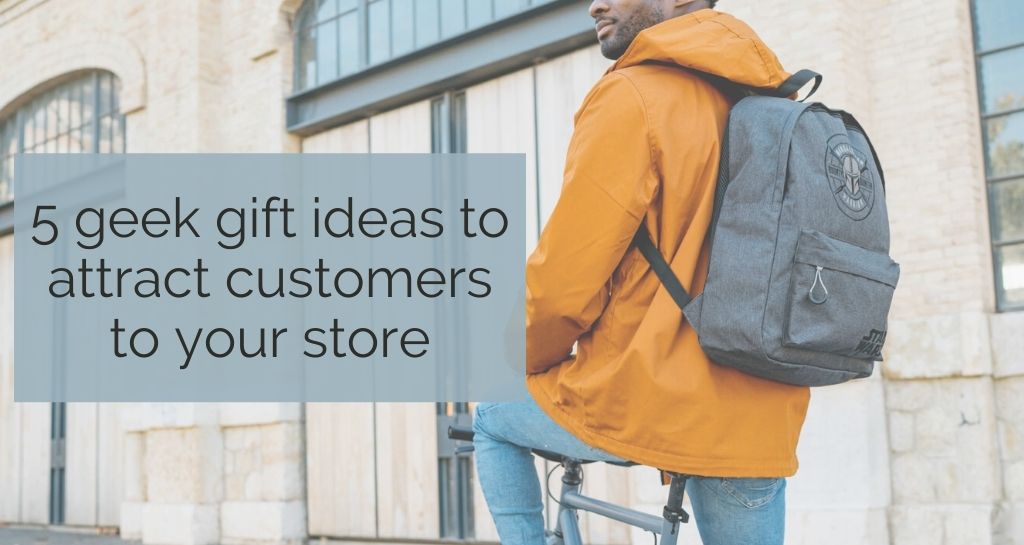 Until recently, having a passion for computers, being the curious type, spending time reading books or playing video games were all considered “geek things!” Time, however, has shown that knowing how to use computers is not so much a geek thing, that video games have become real forms of art ... in short, the geek style, identity and philosophy are in the limelight! But who are the geeks? And how can you attract this audience to your store?

Who are the geeks?

"Geek" is an English term that has become popular in many other languages.

Since some years ago, being a geek meant being a loser. Yes, the word “geek” has such a negative meaning! However, even back then, the term geek also identified a whole specific series of characteristics that distinguished geeks from common losers, and even nerds.

But what, then, are the characteristics of geeks?

When computers were still something strange, obscure, and difficult to understand, the kids who were passionate about them caught the eye. As often happens, enthusiasts become obsessed and thus deserve the nickname of geeks. The passion for technology has remained one of the characteristics that distinguish geeks.

Geeks are also the curious types ... Those so curious who read books on every interesting subject, go through libraries, and know everything and more about what they are passionate about are geeks!

Geeks also love movies and video games. Their favorite genre is certainly fantasy: you will hardly find a person who defines himself as a geek who does not know The Lord of the Rings by heart!

Another genre that unites geeks from all over the world is science fiction: if The Lord of the Rings is the holy grail of fantasy, for science fiction the reference point is certainly Star Wars.

Finally, geek is also a word for eccentric people. Characteristic of geeks is certainly not being extroverted, yet, usually these people stand out: they have different clothes from all the others, big backpacks instead of handbags, and go to bookstores, libraries and pubs, instead of stadiums and discos.

How to attract geeky customers to your store?

Now that we have clarified what we mean by geek customers, we can better understand how Cerdá products can attract this slice of public to your store, whether it is physical or virtual.

5 gift ideas to attract geeky customers to your store

Star Wars is a real reference point for geeks from all over the world. Some grew up with films, others rediscovered them because they were born later. In any case, the characters, the science fiction world, and the Force that unites all things in the universe, for geeks, are so familiar that they seem like old friends and acquaintances rather than products of the imagination.

Harry Potter is something younger geeks have in common. We are not just talking about children but also about young adults: it is the latter who have grown up, waiting year after year for the release of the next book, the next film ...

A pyjama is always an unexpected and fun gift idea and when you combine it with a passion as strong as the one that geeks have for Harry Potter ... success is guaranteed!

The Marvel Multiverse has all the features that geeks love in fiction: it's large, complex, and populated by countless characters, each with their own story, background, and storyline.

For many geeks, then, Marvel represents the refuge they have found for years in the countless comics they have read as children and adults. More than the single character, therefore, the geeks are conquered by Marvel itself. And what's better than a Marvel logo sweatshirt when you have to give a geek friend a gift?

It may interest you: Marvel products: superheroes never go out of style

Friends has become a television cult. Geeks are not fans of television - not of what was TV in the days of Friends - but if a work of art marks - somehow - history, then geeks will turn to look.

With Friends it happened just like this: many young people have rediscovered the most famous sitcom in the world precisely because they are curious to find out how it made a funny TV series go down in history.

The Friends t-shirt is a perfect geek gift idea for geeks from all over the world and of all ages.

Let's go back to the world of Star Wars. Here, however, we want to offer you a more particular product: the Star Wars notebook. Not everyone knows that geeks, curious and studious, always need stationery products. Now that you know this, don't hesitate to make this type of Cerdá products available in your store to attract geeky customers.

Keep reading: Ideas to be successful with geek products

Are you looking for geek gifts for your shop? Cerdá is your wholesaler!

Cerdá is the perfect distributor for geeks products aimed at both physical and online stores. We must specify that, however, geeks tend to buy online. If you have the chance, then, it is online that you should focus your proposals for geeks and also your marketing campaigns aimed at this market segment!

Products and Novelties Point of Sale Tips and Advice

Winter footwear, products and characters that will be in fashion in 2022!